Just like we announced last week, we are finally launching the open beta tests of Dragon Lords 2. The beta test realm will be much closer to the final release version of the game than the alpha realm was, though at its launch not all features will be fully available.

We will be adding new content successively as the tests progress, and we will be keeping close watch on the realm’s progress in order to balance and fine tune the already existing features.

In order to accelerate the early phase of kingdom development, all kingdoms will be starting with a high number of turns, but all other mechanics will be operating on regular terms – we want to simulate the environment of a regular realm as closely as possible. The testing will begin on Sunday, May 29th, at 8PM GMT, and will last for two months. Over this period of time, we want to see how the realm’s economy, power structure and player interactions develop – this information is crucial to a healthy and balanced game environment later.

In order for the tests to be truly successful, we will need as many players as possible to participate – we will greatly appreciate it if you decided to join us on the beta realm, and are looking forward to your invaluable feedback. All testers will receive a special Dragon Avatar, as well as The Vanguard title after the game has been released. Additionally, to encourage competition, top ranked kingdoms and alliances (in the Legendary ranking) will receive various valuable rewards as well. 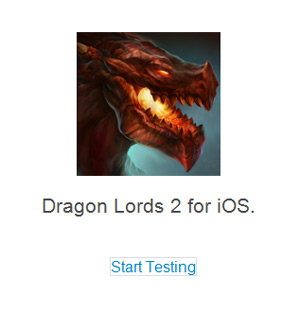 The Android, Windows and Linux versions of the beta client can be found on our forum (here), while players who applied for the iOS client can expect an email from us with more details very soon. For iOS client, if you are interesting in participating in the Beta, please let us know (send us your email address via forum or the Facebook fanpage) and we will add you to the tester group.

We are looking forward to seeing you in the realm!