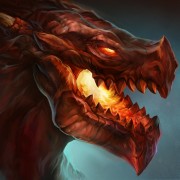 The most amazing things in the world are created because at some point in time one person sits down and asks a question “Can I do it?” Dragon Lords history is no different. It all started with an idea of a game unlike any other that existed at the time. This thought transformed into something that brought joy to thousands upon thousands of players across the world. Five years after the release we want to answer another question: “Can we make it better?”

And the answer is: “We sure as hell are going to try!”

The time has come to make a leap and bring all aspects of the game we all love to entirely new level. After long months of secret labor, after thousands of hours of work, we are finally ready to reveal: Dragon Lords 2.

Before we dive into the details, let us state it beyond any doubt, the original version of Dragon Lords will remain online and stay in the App Stores. The sequel will not replace the existing game, it will exist in parallel.

Original Dragon Lords was released nearly five years ago, but work on it started close to seven years back. Seven years is a LOT of time when technology is involved. Things changed more than we could imagine, they didn’t move the direction we thought they would all those years ago (we will make a detailed technical post for anyone interested later), so the technology used to build the original client became obsolete at some point in time. In order to make the game competitive with the new titles we had to make an enormous leap, which meant starting everything from scratch. 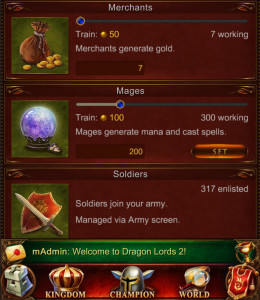 Dragon Lords 2 is created using Unity3D, a game engine with enormous capabilities. Thanks to that engine we were finally able to implement User Interface MUCH more friendly to players. We tried to remove unnecessary taps and typing wherever it was possible. Sliders! Sliders everywhere!

Thanks to the completely rewritten client-server communication the amount of data exchanged was limited by up to 90%, making the game work faster and much more friendly to your data plan.

While this is not the core feature of Dragon Lords, we also took advantage of the great tool which is Unity3D, and implemented some spectacular visual effects, making the game appeal not only to the hard-core strategy fans, hoping to reach out to a vast number of semi-hard-core and casual players. Lack of this in the original game was one of the factors limiting its growth.

This answers the technical part of the “Why?” question. Lets take a look at the gameplay reasons.

As you might be aware, Dragon Lords was our first game, born out of the dream of creating something we would like to play ourselves, however backed by little experience in creating complex worlds of a MMO strategy, a genre which was only being born seven years ago. Only after watching this incredible ecosystem evolve over the years we gained understanding of what problems plague this environment, what lies at their roots and how to design it better.

This knowledge came with an understanding that in order to create a healthy environment we have to start from scratch and change some of the most basic things. Once again, we will make a dedicated blog post describing our analysis of the economy and changes we have planned in the sequel, for now we will list only few of the most critical adjustments.

Our primary goal in designing Dragon Lords 2 mechanics was to make it more fair to all players, both veterans and newbies alike. We wanted to create a much more balanced economy with more focus on war than farming for it. Our secondary goal was to change the gameplay in such a way that it became more enjoyable, less tedious and easier to understand. 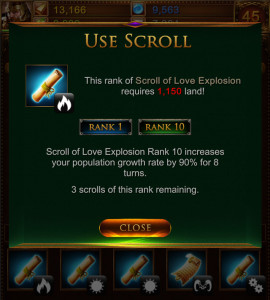 The most fundamental change affected magic (including scrolls). Rather than keeping the flat bonus system employed in the first game, we have introduced a system calculating the effect based on the spell/scroll power along with the size of the affected kingdom. The same scroll will have a powerful effect on a small kingdom, while if it were cast on a kingdom much bigger, the effect would be close to negligible.

We removed the hidden modifiers, no more diminishing returns, the spell has EXACTLY the effect it says it has. We have removed the limits of number of spells/scrolls one kingdom can have on them, a much more logical limit was introduced: only one effect of the type can exist at any one time. This removes the element of repeatedly casting the same spells, which we have found unnecessary in retrospect. 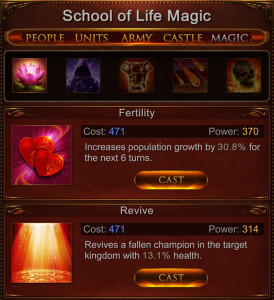 Initially we have included 27 spells in the game, divided into five Schools of Magic. The number of Schools at your disposal will depend on the race and building upgrades. Your choice of Schools will have a big impact on the way you play the game and should emphasize the role of each kingdom in the alliance.

Another major change you will notice, affected the Champion. We were well aware of the controversy around the way skill points were calculated in the original game and thought very hard on how to avoid it in DL2. We believe we have arrived at a good solution.

Once more we decided to make the game rules as transparent as possible. You will know EXACTLY what bonus your Champion gives, no more guessing and speculating. We also decided to completely change the skills. We left Spirit and Life, however the rest was dropped and replaced with 8 specializations affecting gameplay in different ways. Once more, in the following weeks we will make a dedicated post explaining the details of this part of the gameplay. For now we will leave you with this: the specializations are Governor, Conqueror, Armorer, Banker, Sage, Archmage, Channeler and Spy.

Each rank of the specialization adds a bonus, for instance, each rank of Banker specialization will increase the output of your kingdom’s merchants by 1%. For the sake of clarity we decided to keep the bonus constant, however in order to prevent too high stacking, the price of unlocking next rank will keep increasing. 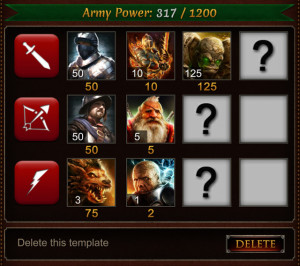 Another topic which deserves its own blog post is the change we introduced to battle and war. Static battle summary was replaced by a “dynamic”, turn-based battle, where each unit performs attacks calculated using its stats (attack/defense/initiative). Units are no longer divided into four categories (useless/attack/defense/summoned). In Dragon Lords 2 each unit will have its role, each will have a special ability (or abilities!) making it stronger against some foes (for example Human Swordsman will receive +2 attack against Orc units). Each will be vulnerable to some sort of spell (Plague will do away with soldiers, Banish with demons etc.) and… just wait for the dedicated post! 😉

War, war supposedly never changes, but it WILL change in Dragon Lords 2. This was one of the topics that gave us the most trouble in the original game, so making it right in the sequel was our critical goal. The solution we came up with, strongly inspired by certain other games, is rather simple.

There will be two types of war, one will be free of declaration limits for any two alliances which want to test their strength. This will be a war on which both sides will agree on, the purpose being simply having fun. There will be little cost involved and no gain other than pride from the victory. 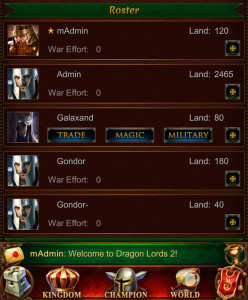 The other type of war will be “ranked” and here opponents will be chosen by the server. Each time you want to declare a ranked war you will see a list of alliances from which you will pick one. This alliance will not be able to surrender, however the leader will be able to adjust the start of the war up to 6 hours earlier or later, to make it more convenient for the defending side.

While it will still be possible for two alliances to “work” with each other in what’s currently being described as a “fake war”, the server will make sure no two groups of kingdoms fight too often, giving everyone a chance to have a fair go at combat. How exactly this will work, we will describe in another post and of course adjust the algorithms as required.

This is not the only change affecting how wars are going to be waged, however, once more, you will have to wait a little bit for a dedicated post.

This is all the information we can share about the gameplay today. We do promise to deliver more in the days and weeks to come. You will also get an opportunity to see it on your own, because first phase of testing will start in just one week! Alpha Test will tell us if there are critical problems we will have to fix before Open Beta can begin. Keep an eye out, we will be announcing how to get a chance at participating in the Alpha soon!

Open Beta will revive Uroboros, for it will last approximately 3 months, in which we will evaluate which of our ideas were good and which still need more work. We will be fixing bugs, adding features, content and putting final polish. Players most active in helping us improve the game in this pre-release phase will be rewarded with items which they will be able to claim on the first realm we launch after the release. This part of the preparations should start shortly after Alpha’s end. 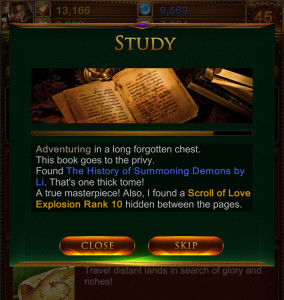 Thanks to the advantages of making the game using Unity, we are going to release the Beta client for Android devices along with the native versions for PC and Mac.

Finally, there is one important thing we have to mention. Because the mobile market went through enormous changes in those five years, independent developers have to be extremely lucky to achieve success with their product, even if it is absolutely amazing. That’s why we decided to seek help of publisher when releasing Dragon Lords 2. Final agreement is still being worked on, however we can already confirm this: the new game will exist outside the BlueComet platform. For more than one legal reason it can’t be tied in any way to existing structure.

We still have a good couple of months of work before the game is ready to be released and in this time we would love to get as much feedback as possible. That’s why we have decided to launch a discussion board on our website. There we will provide more information on the progress of testing, existing features, answer questions and discuss ideas on how things could be made better. We invite you to join the community: MDS Forum .

The Gates Are Open! Dragon Lords 2: Units and Battle
Scroll to top