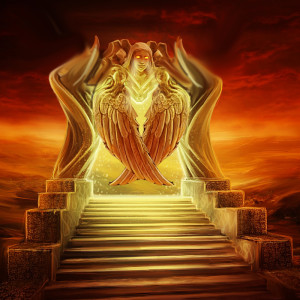 When Dragon Lords gameplay were designed we wanted to center it around Alliance construction of the Portal / Stargate. This was destined to be grandest achievement, the final frontier. That’s why for a long, long time we focused our attention on adding additional content to the game, leaving the end game in the same shape.

After observing the evolution over the period of close to four years we finally changed our minds. Dragon Lords is no longer the game it was three years ago, it’s played differently, players expect different challenges, the world has changed. And so should Dragon Lords.

The change we are currently preparing is going to re-shape the end-game. Nether Portal will no longer be the biggest achievement in the game, though it will remain in its current form. On top of the Portal we are going to add a bigger challenge, something we believe will provide more excitement than current Portal constructions. This new challenge is Celestial Gate and we are finally ready to reveal more details about it.

Our first concern in creating the new piece of the mechanic was to make it “new” rather than simply copying existing solutions with higher requirements. That is why Celestial Gate is going to employ a number of brand new measures making the construction more challenging and participation in the event more engaging.

The biggest difference between Nether Portal and Celestial Gate is going to be the fact that only one active construction of the Gate will be allowed at one time. There will be no queue of simultaneous constructions, if your alliance wants to build the Gate, it will have to stop the alliance currently constructing theirs. This is going to be accomplished by dropping the alliance under the land requirement OR by crushing them in war to the point where it ends automatically due to 25% rule. Keep in mind that the war which runs its entire course will NOT pause the gate even if building alliance loses it, winning by Victory Point count is simply not going to be enough. 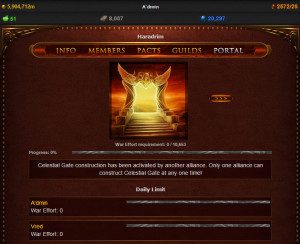 Testing of the mechanic is under way.

Additionally we are going to introduce another major change, which we hope will bring out some of the players out of retirement and will make Celestial Gate construction even more challenging. We are going to implement land purchase lock on all realms, however since it is only intended for the Gate, we will set it to individual kingdom land requirement, 8,000 acres on regular realms and 10,000 acres for HardCore. Above this threshold land will have to be conquered rather than bought. 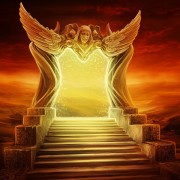 e consequences of introducing such change will affect all players in multiple ways, but we also feel that it will bring more life to all realms, breaking the current cycle of farm and construction, making war both necessary and desirable, rather than something to be avoided – without it you will not be able to meet the land requirements for the Gate (unless you are already there – in that case, congratulations!).

Finally, Celestial Gate is going to utilize the statistic we introduced some time ago: War Effort. Alliance wanting to start the construction will have to prove their worth by going through battle. Unlocking the construction for the first time will consume 1 point of War Effort for each acre of the alliance land. Completing the Gate will increase the requirement for a period of time, the price will go down with time though.

War Effort will be consumed proportionately to land, however members who have gathered excess points will be able to use them to cover players who have not earned their share yet. Additionally, only members being part of the alliance during the activation of the construction will be eligible for the rewards. 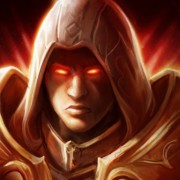 Of course, where there are requirements, there also have to be rewards, and there are plenty. Starting with a large sum of Coins, completing the Gate will also reward you with new units: one Archangel, an immortal unit similar to the Dragon Slayers and a group of Seraphs – celestial beings more powerful than the red dragons. Completing the gate will also provide a permanent boost to your champion’s statistics, as well as a new title. Finally – the first team to complete the Celestial Gate on every realm will also earn an unique avatar. More rewards may still be in the works – we want to make sure that the effort will be worthwhile!

One question on everyone’s mind is most likely “when will this be rolled out?” We don’t have a definite answer yet. Initially we wanted to open the Gates by the end of February, however as we went through implementation a number of issues and problems with the mechanic were spotted, which forced us to go back and redesign a few things. We want the new gameplay to be free of the loopholes, which could be exploited and make the game less fun for everyone, that would be the opposite effect of what we’re trying to accomplish. We also wanted to give players some time to digest all the changes and adequately prepare for the day of the release (we’re expecting many alliances to make the effort to grab that “First Celestial Gate” achievement). At this stage we are aiming at the end of April and we promise to give you two weeks heads up before the day of the release.

Time to blow off some Steam! A tribute to Terry Pratchett
Scroll to top